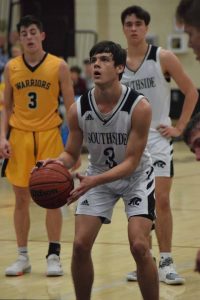 Southside Boys Basketball Off To A Great Start

The Southside boys basketball team will begin area play on Tuesday, Dec. 10 at home against Alexandria, and they have navigated through a difficult schedule to start the year. Southside is off to a 5-2 start, including wins over Springville, Cherokee County, Glencoe and two victories over Hokes Bluff. Junior point guard Chris Lengyel is leading the way for the Panthers, and he is averaging 11.7 points and 4.3 assists per game. The Panthers have relied on a balance scoring attack through their first seven games, and six players are averaging at least six points per contest. Colton Morrison is scoring 8.3 points per game, and he leads the team in 3-point percentage at 38.9 percent. Michael Rich Jr. is averaging 8.1 points and 4.4 rebounds per game, while Taylor Carr is adding 7.4 points off the bench each contest. Parker Crask and Tommy Simmons are each averaging six points per game, and Jordan Grantland is leading the team in rebounding with 6.2 per game. Tuesday’s pivotal matchup against Alexandria will go a long way in determining the Panthers’ seeding for the area tournament, and they have a challenging upcoming schedule as games against Fort Payne, St. Clair County, Springville, Pell City, Pelham, John Carroll and Sardis are on the horizon in the month of December.