Lincoln scored from 5 yds out in overtime to defeat the Panthers Friday night at Barney Hood Stadium. The Panthers came from 13 pts behind and tied 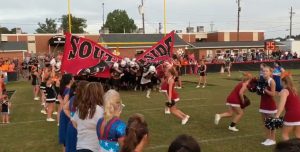 the score 20-20 with under 4 minutes left in the game. Michael Rich threw a great 10 yd. touchdown pass to Carnel Davis and things were really looking up for the Panthers.  However, a blocked field goal at the end of regulation sent the game into overtime. An ill-timed personal foul at the end of regulation put the Golden Bears on the 5 yd. line instead of the 10. After Lincoln’s touchdown, a controversial personal foul was called which put the Panthers on the 25 yd line with 4 plays to score. Nolan Johnson kicked 2 field goals, 50 and 37 yds to win him the MVP of the game. In spite of the loss, Southside showed tremendous character in managing the comeback. The Panthers face Hokes Bluff Thursday night in Hokes Bluff.