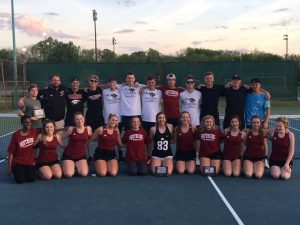 The Panther tennis teams finished the regular season on a high note by sweeping Ft. Payne on senior night in Gadsden Thursday.  Led by seniors Hayden Davis, Ben Deike, Zach Lockridge, and Mason Prickett, the boys picked up their 12th victory in their last 13 matches.  On the girls side, seniors Alex Dugger and Zoee Sitz led the girls to a dominant 8-1 victory.  “It’s always bittersweet to say goodbye to this incredible group of seniors.” said Coach Zack Blume.  “It really has been a joy to coach these kids.  I’ve had some of them in the program since they could start playing for the school, and it’s been amazing watching them grow as tennis players and people.”
Next up is the sectional tournament in Boaz on Monday and Tuesday.  The two schools with the highest point total at the sectional tournament will move on to the state tournament in Mobile the following week.
Panthers Official Sponsor