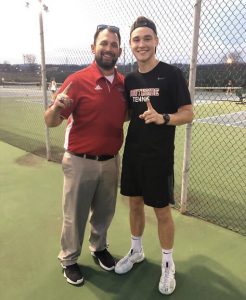 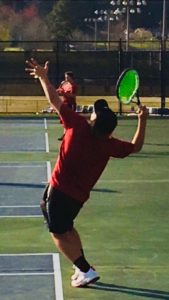 The Southside tennis team made their 2019 season tournament debut at the Frostbite Invitational in Pelham on Saturday February 9th. After a slow start against the top ranked 6A teams in the state, the Panthers made a comeback to win their bracket. Although the Panthers were defeated by Pell City in the first match of the day, sophomore  Colton Dugger was winning his match against the two-time state champ 6-3, but fell short.

The first two matches of the day didn’t dampen the spirits of the Panthers too much because they rallied for the third and fourth matches to dominate opponents Etowah and Pelham. Jackson Opdyke, junior and first-year player, overcame two tough losses earlier in the day by winning two singles matches back to back. His final win of the day against Etowah clinched the bracket for the Panthers and ended the long, chilly day on a high note. Third court doubles teammates Micah Prickett and Dylan Winningham, juniors and veteran players, played strong against Pelham and won their match with a convincing 6-2 score.

The final match against local team Etowah was the highlight of the 12-hour long day with all teams dominating their opponents. Highlights include junior Hudson Hopper winning 8-1 and doubles team Hayden Davis and Noah Hefner winning 8-3. Assistant coach Mrs. Russell said, “I am always amazed when I watch Colton and Hudson playing; their skill on the court is second to none.”

The Panthers are looking forward to a great season with upcoming matches against Etowah, Douglas, and Boaz.